Want to clear up confusion about who’s doing what on your project? TeamGantt’s RACI feature makes it easy to assign roles so everyone knows who’s Responsible, Accountable, Consulted, and Informed on each task.

With RACI, you can easily indicate the responsibility level for each user on every task, then keep those roles in view while you’re working on your project. This helps eliminate confusion and clarify exactly what everyone needs to do.

Looking for more context? Learn all about the RACI methodology and how to use RACI charts to map out roles and responsibilities. 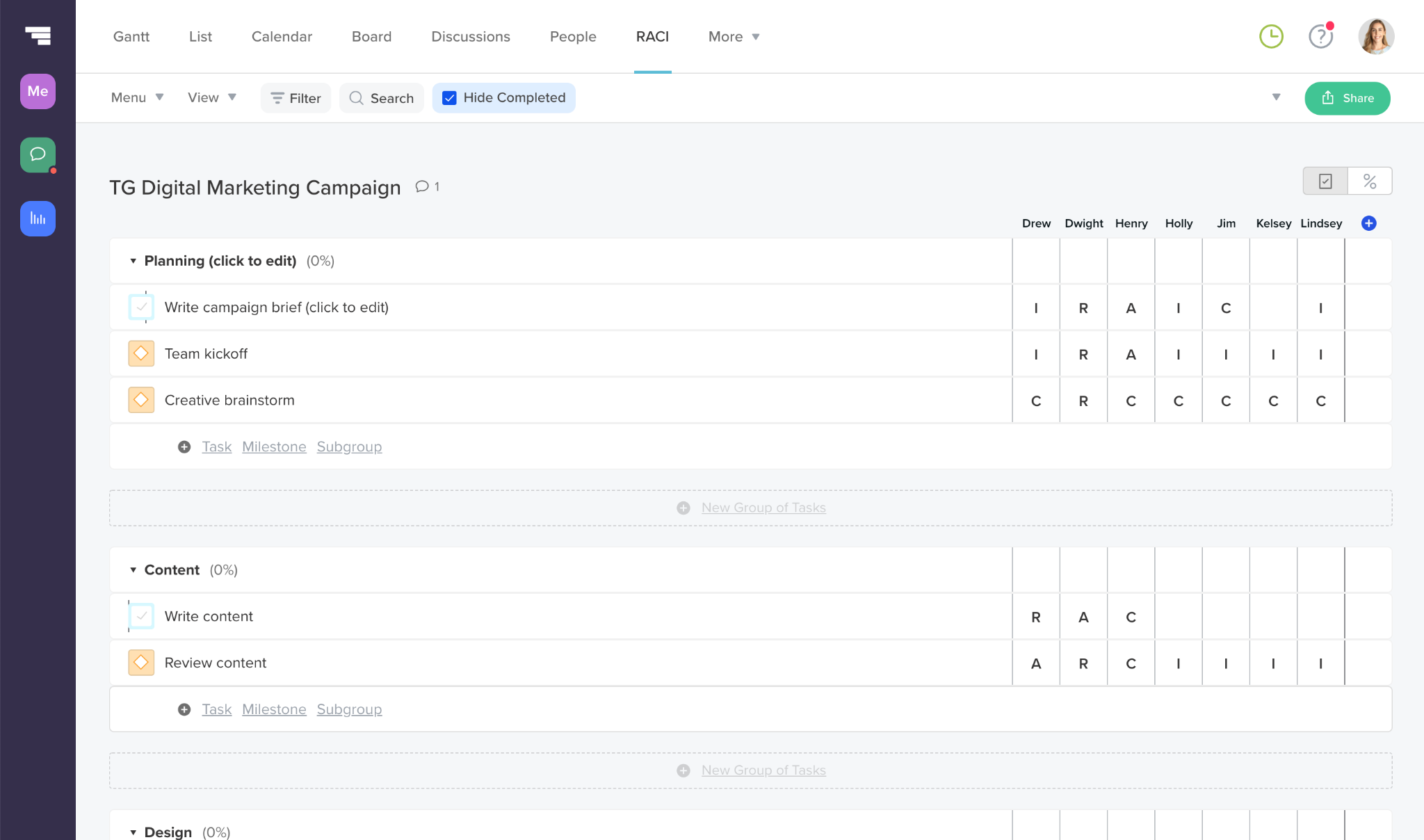 Accessing RACI on your project

The RACI feature is available on all free and paid TeamGantt plans.

To access the RACI chart, open your project, and toggle to the RACI tab in the top navigation bar. 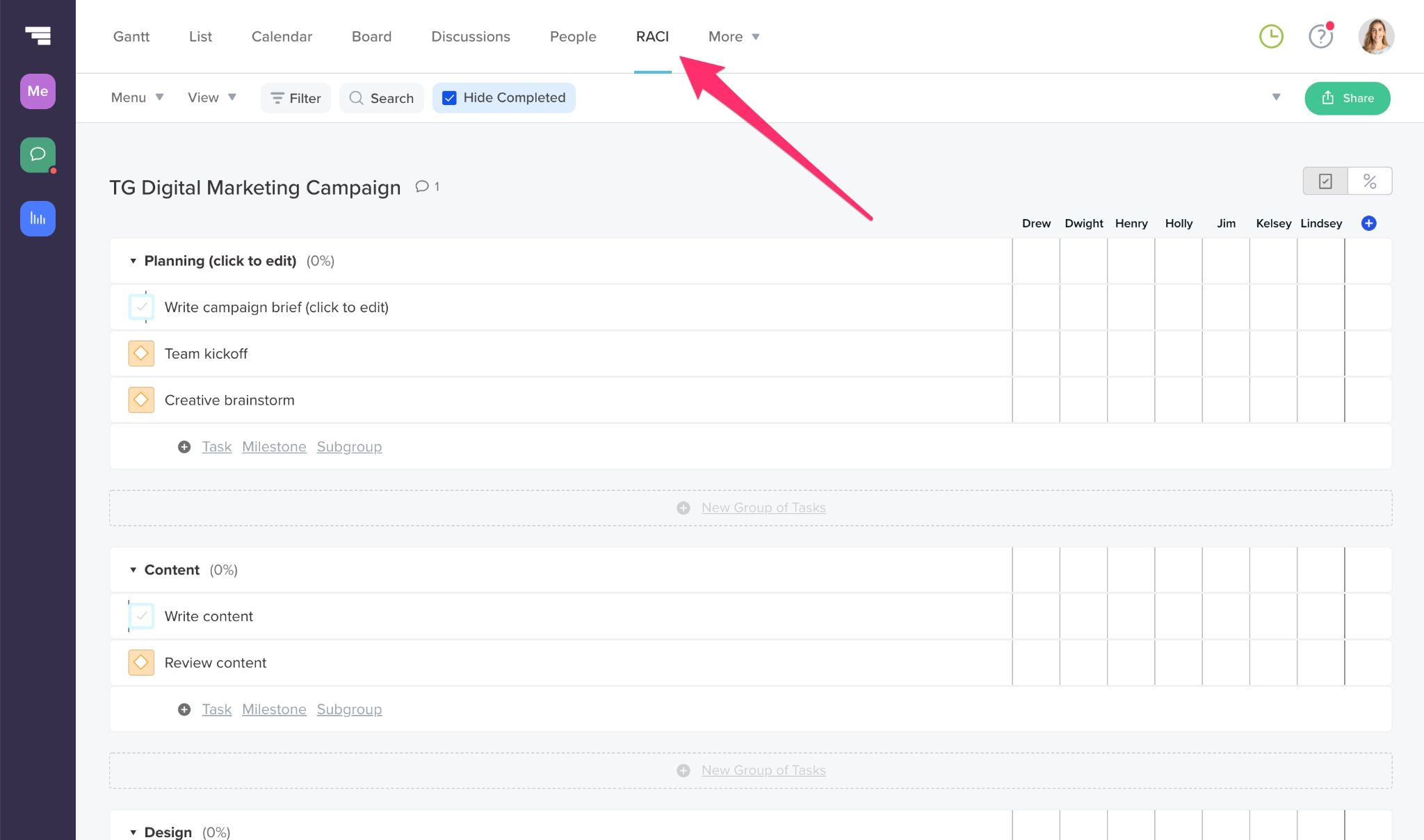 This will display all your project tasks in a list format (rows). On the right side of the chart, you’ll see a column for each user currently invited to the project with cells for each task in the project.

Assigning RACI roles to your project tasks is easy! Simply click the cell below each person who needs to be assigned a role on a task, and choose one of the RACI options from the drop-down. You can also clear existing RACI assignments here. 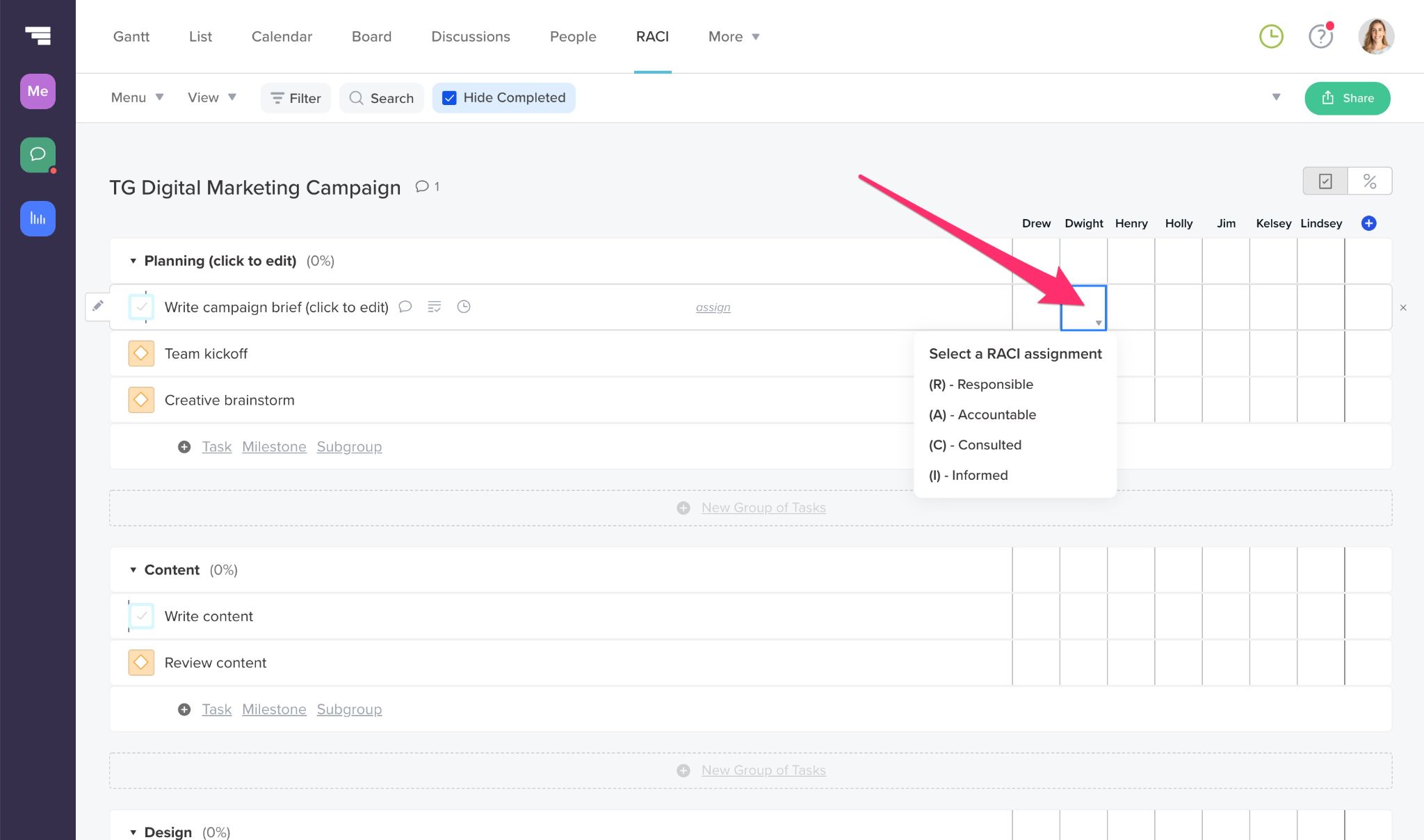 Here’s a quick explainer of each RACI role available:

This team member does the work to complete the task. Every task needs at least one Responsible party, but it’s okay to assign more.

Every deliverable is strengthened by review and consultation from more than one team member. Consulted parties are typically the people who provide input based on either how it will impact their future project work or their domain of expertise on the deliverable itself.

These team members simply need to be kept in the loop on project progress, rather than roped into the details of every deliverable.

If a user’s assigned to a task and has a RACI role on that task, the RACI value will appear in parentheses next to the user’s name on the gantt chart.

Note: If a user’s been given a RACI role for a task but hasn’t been assigned to that task, their name won’t appear next to the task in Gantt view. You can always see your project’s full RACI chart by toggling to the RACI tab in the top navigation.

Pro tip: The best way to see all users assigned to project tasks on your gantt chart is by selecting the View drop-down menu and toggling on the Show Resource names next to bars option.

To learn more about TeamGantt, join us for one of our free classes!